After satisfactory completion of the examination you are awarded a “Certificate of Energetic Hypnosis” from The Australian Academy of Hypnosis. You can begin right now and have the entire curriculum delivered straight to your email via with instant download links.

“Mesmerism was, from a philosophical standpoint the most pregnant of all discoveries, even though from the moment it appeared mesmerism propounded more riddles than it solved.” – Schopenhauer.

“There arose uproar amidst the wise assembly, whose learning was not equal to the comprehension of Mesmer’s discovery, and they declared it, in spite of whatever might be urged in its favour, to be the ‘product of an excited imagination, as the learned academicians have equally pronounced previously and subsequently many more other natural truths. It must now be remembered that the same Academy rejected Franklin’s discovery of the lightning-conductor, and Jenner’s discovery of the cow-pox. It is also known that when the first model of a steam vessel was presented to the Emperor Napoleon, and he desired the Academy to examine and test this discovery, and pronounce a favourable opinion upon it, the wisdom of the academicians declared it to be an entirely untenable invention. Napoleon is known to have exclaimed at a later period, “How foolish was I, not to have relied upon my own simple understanding, rather than upon the wisdom of the Academy!” – Justinus Kerner.

DESIGNED FOR INDIVIDUALS OR PROFESSIONALS

Practitioners of other modalities looking to expand qualifications

Those on a continual quest for knowledge & truth

TEACHERS OPEN THE DOOR, BUT YOU MUST ENTER BY YOURSELF

WHAT YOU WILL RECEIVE…

In these videos Rick demonstrates a myriad of different applications of mesmerism from inductions to energetic transference. Learn how to induce trance non-verbally and how the relationship of the connection between the client and the magnetist is utilized to facilitate treatment of various issues. These rare eBooks date back as far as the early 1800’s. They offer invaluable insight into the ‘old methods’ as used by the authors including Franz Anton Mesmer, Baron DuPotet, James Esdaille, Alphonse Teste M.D., Ellenberger and even a Thesis on Franz Anton Mesmer by Rick. They are included in the course as reference material for your own personal knowledge and inspiration for application. 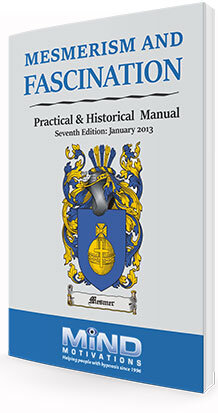 AN EXTENSIVE MANUAL ON MESMERISM AND FASCINATION METHODS & APPLICATION

This training manual is intended to be used in conjunction with the Mesmerism books and videos that form the backbone of the course. This manual covers…

What are Mesmerism and Hypnotic Fascination?

Nowadays there are many variations of hypnosis and many other modalities that profess to be hypnosis. This situation creates the dilemma of what actually is real hypnosis. It is from the ancient trance inducing techniques that modern hypnosis was born.

Imagine if you could learn how to deeply and profoundly hypnotise other people, often without even uttering a single word. You Can, I have spent more than ten years researching, testing, and utilising the techniques and methods of the Magnetists, Hypnotists, and Fascinators of antiquity. Some of the techniques have been known since ancient Greek and Egyptian times, others have been practiced for thousands of years by the Fakirs and the Holy men, whilst Mesmerism and Magnetism were prevalent only a few hundred years ago.

The old methods do indeed have significant merit, and the resultant healing or change is much faster and more effective than any modern hypnosis technique. Despite all of the psycho babble, the swish names, and the flashy diplomas; many of today’s hypnosis ideologies barely induce more than a very light trance, which is fine for clients who are quite happy to complete ten or more sessions to notice a result.

Even if it is not well defined by science, animal magnetism has its own reality, and it had been used for thousands of year by magnetic healers around the world, before Anton Mesmer put a system and a name to the practice, and claiming it as his discovery, called it Animal Magnetism, which soon also took on the name Mesmerism.

Many of the old texts from the Magnetism and Mesmerism era, and also further back in time, speak of feats that few modern hypnotists are able to achieve, whereas in that era these things were passed off as common and usual.

Modern hypnosis gives many reasons as to why it works, but the techniques of modern hypnosis are usually restricted to relaxation and visualisation and are bound to the use of words, and have also mostly thrown all possibility and acknowledgement of the energetic aspects out the door.

Until recently Mesmerism couldn’t be scientifically explained, and so it was generally dismissed or ridiculed. Although a studious study of the writings of the old Magnetists and Mesmerists, or of those who wrote about them amply demonstrates too many horrendous surgical operations and remarkable cures for Magnetism to be based on imagination or fraud. Now in the 21st Century, the energy field and the transference Mesmer and many others spoke of can be measured and observed.

TO OUR ONLINE STUDENTS RESOURCE CENTER

Watch and learn as Rick demonstrates the practical application of many hypnotic inductions and therapeutic techniques. These videos show first-hand how to use hypnosis, fascination and mesmerism as demonstrated by Rick in his group trainings. Learn how to easily and deeply induce the Mesmeric state.

You could literally spend weeks reading all the amazing content in our eBook center. Download and view everything from rare hypnosis & mesmerism books to practical instruction guides to personal development books by many acclaimed authors.

500 + HYPNOSIS SCRIPTS TO PRACTICE WITH

These scripts can be used as you delve further into your course to practice on people with. They can also be used as inspiration to come up with your own scripts or as examples on how to approach treatment of the many different issues covered.

YOU RECEIVE A ‘CERTIFICATE OF ENERGETIC HYPNOSIS’

By completing the examination that accompanies this course you will be awarded a A Certificate of Energetic Hypnosis Examination from the Australian Academy of hypnosis. This certifies that you are adeptly qualified in mesmerism, fascination and energetic hypnotism. This is a very thorough course, packed full of invaluable resources, and will assist greatly how you help others professionally or non-professionally, as well as obtaining immense benefits to your own personal life too.

LEARN AT YOUR OWN PACE
ANYTIME, ANYWHERE!

ALL YOU NEED IS A COMPUTER OR MOBILE DEVICE!

This course is designed to be completed in your own time without any deadlines or pressures. All of the materials can be downloaded and transferred to your phone or tablet to go view at your convenience. The Online Resource Center can be accessed anywhere you have an internet connection to watch the videos live, or to download the eBooks and scripts for your personal collection. This is the perfect way to learn if you are time-conscious or lead a busy life!

WHAT OTHERS ARE SAYING ABOUT THIS TRAINING

Rick, I am watching and reading hand in hand the books and vids – they are perfect and comprehensive and I feel that by the end of this course anyone would have enough ideas practical and methodological background and diversity to be able to understand and start practicing mesmerism and fascination. Thank you so much really i do appreciate it and will carry on watching and reading them.

Hi Rick. Thank you again for the opportunity to be able to learn about Mesmerism and Fascination. As one of your students of 2005 I am continually grateful for your generosity. I have been looking through the videos this morning to make sure that they are all complete and I have just looked up at my clock on the wall above my computer and had a laugh, though I wasn’t surprised. The clocked had stopped 2 days ago because the battery was flat and as I look at it now, it is running perfectly! Can’t wait to get into this course!

If you are ready to discover the ‘true’ traditional forms of hypnotism, mesmerism and fascination, purchase this course below and immediately access…

The purchase link above will take you to the checkout at www.hypnouniversity.thinkific.com. After registration you will be given immediate access the course materials and access the online Students Training and Resource Center. Due to the high volume of rare quality information supplied in the Mesmerism training course please ensure that you want to proceed before you register and purchase the training. We will happily re supply new download links for up to 12 months after purchase if you contact us. How ever there ARE NO REFUNDS UNDER ANY CIRCUMSTANCES